Back and neck pain are often caused by a herniated disc. As an Oakleigh chiropractor, Dr Liveriadis often cares for patients who have pain caused by disc herniation and related issues.

Within the spine, there are 33 vertebrae. Between each of these is a cushion known as an intervertebral disc made of a soft, gel-like substance surrounded by a tough, fibrous ring. If this exterior ring becomes ruptured, the soft interior of the disc can bulge outward, placing pressure on the nerves and ligaments.

Nerve compression caused by a bulging disc may result in tingling, pins and needles sensations, numbness, muscle weakness, neck pain, sciatica, and back pain. A herniated disc does not always result in pinched nerves. A torn spinal disc stimulates the body to release inflammatory chemicals. These can directly cause pain.

A herniated disc may occur when twisting, bending, or picking up something heavy or with incorrect form. Other causes include a hit to the back, a fall, auto collisions, or work injuries. Aging also plays a significant role in increasing the risk of disc herniation. As you grow older, the spinal discs have a reduced water content, making them more likely to rupture or tear. Other risk factors include genetics, being overweight, and working a job that requires repeated lifting of heavy objects. 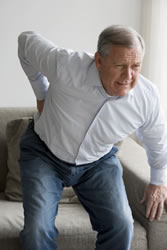 Disc herniation is also known as a slipped disc or ruptured disc. However, 'slipped disc' is a misnomer, since the spinal disc cannot 'slip' from its position on the vertebrae. Rather, the disc is ruptured, torn,or irritated instead of slipping out of position.

At North Road Chiropractic, we use chiropractic adjustments to alleviate pressure on the nerve being affected by the disc herniation. This allows the nerve to heal naturally. We also suggest exercise rehabilitation, which strengthens spinal ligaments and core muscles. Studies have shown this to be an effective approach for treating herniated discs. Call North Road Chiropractic to discuss how chiropractic care can help to alleviate your disc herniation pain in Oakleigh, Mt. Waverley, Clayton, and East Bentleigh, Melbourne.